The Pawn by @AlexaAston #99cents for #Kindle

Book 1 in a new Medieval Trilogy,
The King's Cousins, is just 99¢ 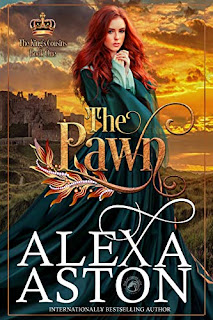 1338 A.D. – Exiled to a convent after her father’s execution for treason, Katelyn de Blays has fleeting memories of the man she adored and the outside world. When her brother’s search leads him to find Katelyn after many years, she is eager to leave with Landon and begin a new life. He brings her to the court of her cousin, Edward III, who betroths Katelyn to a powerful earl of Northumberland, using her as a political pawn to show his continued support of his northern noblemen.

When Sir Nicholas Mandeville returns from patrolling his family’s lands along the Scottish border, he discovers his father has died—and left a widow—whom his uncle wed Nicholas to by proxy during his absence. Angry at becoming the Earl of Northmere and having no choice regarding his wife, Nicholas vows to leave the widow untouched until he knows whether or not she carries his father’s child.

As time passes and Nicholas loses his heart to this brave, young woman, he is astonished to learn Katelyn wishes for their union to be annulled. Can he convince Kate to remain wed to him—or will Nicholas sacrifice his own happiness and let the enigmatic beauty go?

“You will cry and cry again at her ordeal. Don’t miss this adventure of one brave lady.”

“Loved all the intrigue... Cannot wait for the second book in the series!”


Each novel in The King’s Cousins Trilogy is a standalone story
that can be enjoyed out of order. Read for FREE in Kindle Unlimited.

All titles in The King’s Cousin Trilogy: