Do You Love Fantasy? Try This New Release! 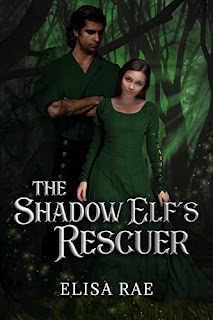 In a world full of elves, woodwose, gargoyles, and brownies, shadow elves are the most feared. Casimir, brother of the elven king’s spymaster, is constantly reminded of this reputation in his service to his brother and his king. Now, dying slowly at the hands of a crazed magus, he holds no hope of rescue. Who would risk their life for a nightmare like him?

Veta lives to protect her younger half-brother, so when their village is raided, she exchanges her life for his. Dragged into a magus’ horrifying workroom in the depths of his fortress, she comes face to face with a nightmare, a shadow elf. However, tortured and dying, he clearly poses no danger. That is until he offers her a bargain.

The Shadow Elf’s Rescuer is a light, fantasy romance novella with a romance between an attractive and intense warrior elf and a courageous human girl. It features forbidden friends to lovers, kidnapping, peril, and an accidental bond.

“Delightful! I am thoroughly enjoying this series and am looking forward to the next Good Read!”

“This was a sweet book that was fast paced and kept you engaged though out the whole book. I would recommend this book to anyone.”

Look for all the titles in the Elves of Eldarlan Series: