Book 3 in the Shadow Haven Series 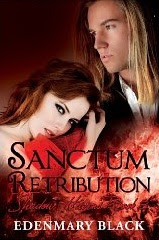 As Ilea steps farther into her role as the law of the Demesne, anxious speculation about Sebastien and his next move flourishes. Tensions build, as passion sizzles at long-awaited Matings and Kya's romantic dream comes true when Meniari asks her to attend one with him. It's a fresh beginning for a warrior with a past and a female hiding a gentle heart behind a tough persona.

Meanwhile, the Father of the Demesnes is having a grand time in Paris, but intelligence soon arrives from the spy he left behind. Infuriated by what he learns, he embarks on a rage-driven plan to force a brutal wedge between the Sanctum and the Saint Rushton Demesne forever, one that will jeopardize Iridea and her unborn child.

A vampiress on the run from the Parisian Demesne risks everything to find Micah Odera in Scotland, shattering his newfound peace with a strange tale of barbaric punishment, an act of treason that saved her life, a nefarious scheme and Circe's dangerous fascination with Sebastien. Seeking the protection of the Sanctum, she reveals all she knows to Miriel and Andrieu, forcing the haven into a partnership with the Saint Rushton Demesne.

A desperately precarious plan takes shape, as Xavier struggles with Ilea's demand that he keep a terrible secret for her. If he breaks his vow, the betrayal may cost him her love. If he keeps his word, she may die. Ultimately, Ilea and Iridea will have a single chance to do what only they can -- bring Sebastien to meet fate.

"Author Edenmary Black possesses the rare ability to weave a multi-layered story with a large cast of characters and never lose her audience along the way."

"...lock your door and turn off your TV and phone, because you will not want to be interrupted till you're finished."

In the Nook Books Store