Romance and Treason in Regency England 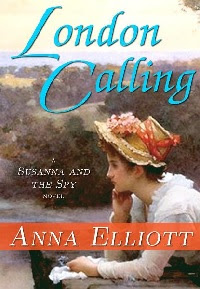 It is the autumn of 1809, and Susanna Ward's life is more perfect than she could ever have dared hope. She is reconciled with her estranged family and engaged to the man she loves, Lord James Ravenwood. But across the English Channel, Britain's war with the Emperor Napoleon still rages. And when a chance letter arrives from London, Susanna learns that James has secretly allowed himself to be drawn into the shadowy world of espionage and intrigue. To be with James, Susanna travels to London--and is soon caught up in a dangerous operation to uncover a ring of French spies and a traitor within the British War Office.

Susanna will risk her life to protect both her country and the man she loves. And yet as she sees James torn between love for her and duty to King and country, she realizes that the greatest danger may be to her own heart.

Set against the glittering backdrop of a Regency London Season, London Calling is a cozy mystery, appropriate for all ages. It is approximately 61,000 words or 244 pages in length.

Although London Calling can be read alone, the story builds on the events of Susanna and the Spy.

"…a fun adventure, with a great historical backdrop in the Napoleonic wars. All in all, a wonderful cozy mystery."


"I thought it a fun read, both as an adventure and a sweet romance. I hope there will be more to come."


"This book was an enjoyable diversion, and put a fresh face on the regency period. I liked it as much as the first Susanna story."