Book 1 of the Shadow Havens Series 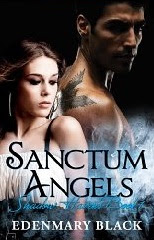 When Priana Grey walks into a bank, she isn't expecting to be taken hostage by a violent thief; nor, is she expecting Detective Joe Cafaris to offer his life for hers. The stepdaughter of fallen angels of the Sanctum, she has concealed her true nature to move among humans for years, but Joe's courage astounds her. Although she knows that falling in love with a human is a disaster, she just can't ignore what she feels.

Joe is a tough loner, cool in the most dangerous situations, but he's not ready for the scorching desire he feels for Priana. He has a million logical reasons to walk away, but his heart wants something else.

Priana's stepbrother, Keirc, warns that she'll find only misery with Joe, yet he guards a perilous secret of his own. His lover, Iridea, is the daughter of Sebastien Galaurus, a ruthless vampire who leads the Demesne, a powerful supernatural haven quite unlike the Sanctum.

When a stunning crisis forces Priana into the heart of the Demesne, a maelstrom explodes in the shadow of supernatural havens on the brink of war, where fallen angels, vampires, weres and daemons call the shots and humans are viewed as critically frail - a place where men and supernaturals can die.

"I would highly recommend Sanctum Angels for a different spin on the Supernatural Universe, a beautiful love story, and just a plain old good new Indie Author to test drive. Kudos! I can't wait for the next book, Sanctum Warriors!"

In the NookBook Store