A Sinner No More by @KellyLBoyce #Kindle @iBooks #Nook and More! 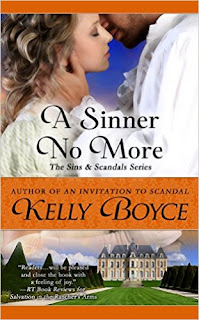 Thomas Fitzgerald, Lord Hawksmoor, has spent the past five years transforming himself into the dangerous man known by London as The Hawk. Owning The Devil’s Lair affords him every opportunity to collect information on those of the ton disreputable enough to enter his gaming hell. But when one disgruntled lord strikes back, Hawk is left with no memory of who he is, where he is, or why he finds himself drawn to a beautiful servant. Nor can he explain the overwhelming need he feels to protect her from an unseen menace.

Madalene Cosgrove has finally left the uncertainty of her life in London behind and found a safe haven working for Mr. Marcus Bowen at his estate, Northill Hall. But that sense of safety is short-lived when her employer brings Lord Hawksmoor home to convalesce after he is attacked. It has been years since she has seen him. Since the unfortunate incident that left her unemployed and running for her life.

What began as an unlikely friendship years earlier, now returns as something deeper, as Madalene helps Hawk recover his memories. But any happiness from their newfound feelings is soon tempered by a sinister threat looming in the shadows, a threat from their shared past that puts Madalene once again in grave danger. This time, Hawk is determined to stop the evil that darkens their door—no matter the cost.

Other titles in The Sins & Scandals Series:
An Invitation to Scandal
A Scandalous Passion
A Sinful Temptation
The Lady's Sinful Secret
Surrender to Scandal