A New Release from Mary Campisi! 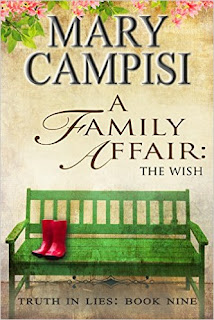 Book 9 of the Truth in Lies Series.

Heartache. Betrayal. Forgiveness. Redemption... It's time to head back to Magdalena, New York, and spend a little time with the people we love to love and even a few we love to hate.

Bree Kinkaid is finally going to get her happily-ever-after with Adam Brandon (from Paradise Found, That Second Chance series), but it's not going to be quick or easy...You won't want to miss the fireworks as one of Magdalena's favorites meets Mr. West Coast. Should I mention he's handsome, intelligent, wealthy, and an all-around good guy? (Oh, but he has a broken heart...forgot about that.) Guess that makes him a wounded hero in need of a second chance, and we all know 's just the place for second chances.