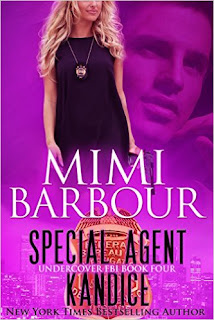 Special Agent indeed, Kandice Warner is everyone’s best friend. Talk about a Barbie doll! This female might have the same pretty-girl looks but even though she has a tender heart, she also has the resilience needed for a very successful FBI Hostage Negotiator. Feelings of inadequacy constantly force her to prove that she’s tough, and she demonstrates her courage when dealing with a murderous bank robber, a desperate jumper, being stalked, kidnapped and beaten. But her tender heart can get her in trouble and she needs to grow a thicker skin. Almost impossible when her obstinate new boss, for reasons of his own, interferes in everything she does.

Assistant Director of the Criminal Investigative Division in , Dan Black is as hard as they come. With the grit of a street youth stiffening his resolve, he’s worked his way up through the ranks, his personal space shields as strong as ever. Until he sees the sweetest things on two legs! A girl from his past. The one he’s never been able to forget. Working undercover in the bureau, he tries to protect his childhood fantasy but she refuses to stay put or take orders. Faced with a woman like that, what’s a mere man to do?

“Kandi and Dan... all I can say is WOW! This was an intense, well-plotted tale that held me in suspense the whole way through. Highly recommended read.”

“…a very interesting book with plenty of twists and turns. This book is part of a great series of stand alone stories.”