Heart of It All Series, Book 3 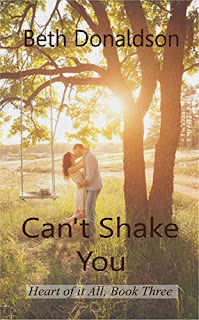 Winter may have in a deep freeze, but passions-and gossip!-burn hotter than ever...

Between working sixteen hour days and being hounded by his mother to give her some grandchildren already, Jim Ascher is frustrated, lonely and more than ready for the future he’s been missing out on. But then his past crashes back into his life when he finds a car in the ditch—with his first love behind the wheel.

The last thing Melanie Starke expected when she hit a deer on a back country road was a reunion with the guy who broke her teenage heart. She’s always had a hard time letting go of the past and seeing Jim brings the hurt back fresh. And the attraction: ’s most charming bachelor is so hard to resist. Jim says he’s changed, but should she believe him? Does anyone really change?
Lies, manipulations and misunderstandings drive a big wedge between Jim and Mel. But the sweet memory of first love mixed with some very adult passion is hard to shake. With the promise of forever on the line, they must find common ground before an old enemy of Mel’s takes their future out of their hands.

About the author: Beth Donaldson writes because the characters in her head won’t stop bugging her to let them out. Her entry 'Carried Away' won The Rudy for mainstream fiction in the Chesapeake Romance Writer’s “Finish the Damn Book” contest for 2014. That win encouraged her to finish the story (now titled Something to Talk About) and keep writing about and all its characters. 'Just a Taste', released in December 2016 is Book 2 in the series. Beth lives in the beautiful countryside with her awesome husband, two sappy dogs and two eccentric cats.

Other titles in the Heart Of It All Series:
Something To Talk About, Book 1
Just a Taste, Book 2

Email ThisBlogThis!Share to TwitterShare to FacebookShare to Pinterest
Labels: @b_don_writes, Beth Donaldson, Can't Shake You, Heart of it All Series