Book 1 in the Possum Hollow Series 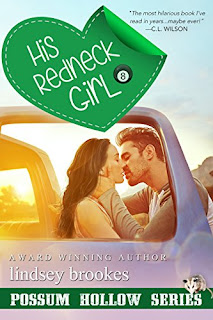 Jimmie Joe Johnson has spent years living up to his hound dog reputation. If he can’t have the one female he truly wants, then any female will do. When he isn’t off diddlin’ some female, he’s practicing for pool playoffs, determined to get his pool team to Vegas. Not only for bragging rights, but for the free trip to ‘’ and the cash prize that comes along with it.

Baylee Jean Brown has never gotten over her first and only love, Jimmie Joe Johnson. So when she discovers the truth about why he really ended things with her all those years before, she sets out to get her man back. And no other thigh-parting female is going to stand in her way. She just has to find a way to make him take notice of her, considering he’d been avoiding her since that day her spell-threatening aunt (yes, she does come from a long line of witches), threatened to place his man-parts in a jar on her windowsill.

Avoiding Baylee Jean Brown in a town the size of Possum Hollow is hard enough, but all of the sudden she’s dressing sexy and aiming all that female heat in his direction. He tries to convince her that she’s better off without him, but how can he expect her to listen to reason when his own heart and body refuse to? Now his man-parts are in a whole different kind of danger. Not because her aunt might still carry through with her threat to pickle them, but because he knows no other woman will ever do.

"Irreverent, bawdy, laugh-out-loud funny. The most hilarious book I've read in years—maybe ever! In fact, I'm pretty sure this book is the reason the term "ROFLMAO" was invented. If you combined Jeff Foxworthy's humor and Jason Stackhouse's good looks and libido, you'd end up with Jimmie Joe Johnson, one smokin' hot hound dog and one hilarious read!" ~New York Times bestselling author C.L. Wilson

Also available in paperback:  US  UK

Also look for this title in the Possum Hollow Series:
Reeling In The Redneck, Book 2