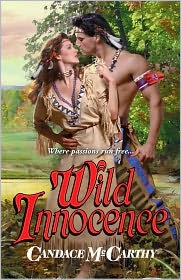 Devastated by her fiancé's betrayal, young Rachel Dempsey fled a life of privilege in Baltimore's high society for a hard-scrabble existence at her father's mission on the rugged shores of Lake Superior. There she tended the wounded brought to the mission's infirmary and vowed no man would ever touch her heart again—certainly not Black Hawk, the disturbingly sensual Ojibwa warrior she was tenderly nursing back to health.

Black Hawk had never allowed a woman to distract him from the dark dream of vengeance he had harbored against his hated Sioux enemy since boyhood. But soon the warmth in Rachel's eyes began melting the ice that shrouded his soul, and when danger threatened the mission, the fierce warrior spirited away the beautiful white angel to the safety of his own village. There Rachel discovered a new peace among the gentle Ojibwa, while the tenderness in Black Hawk's fiery touch ignited a sudden passion—convincing them both that they shared a love as bold and timeless as the untamed plains of the wild Northwest.

"…touched my heart and transported me back through time to an early period in our country's growth. This is a book that I will gladly place on my "to read again" shelf."

"I did not want it to end! I especially liked that she based her Native American romance somewhere other than the plains. I had begun to wonder if there were any writers out there that knew about the Woodland's Indians."

"…a wonderful escape from the normal, everyday chaos."