Don't believe everything you see! 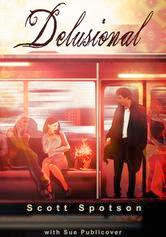 When rising marketing executive Patricia Fowler falls for Paul Blast, a married co-worker, she tries to put her life into perspective—a task that becomes increasingly difficult when she starts having eerie hallucinations. Patricia’s dreams of a happily ever after turn into one nightmare after another as she battles threats that go beyond her imagination.

Is her new love behind the torment? After all, his former girlfriend ended up in an asylum.
Or could Paul’s wife be more than a bored, spoiled, rich girl?

Meanwhile, the FBI is trying to track down a thief who magically appears and disappears, taking priceless gems and artwork with her.

“Delusional” is a fast-paced thriller that blurs the lines of reality and fantasy, leading to an explosive climax where what you see isn’t necessarily what you’re going to get!

"I think it was brilliant."


"I enjoyed the crispness of Spotson’s narrative style… “Delusional” left an opening for a sequel, and I would be interested to see how the story continues to unfold."