Inside Heat by Roz Lee - Twins in love with the same woman! @IWriteRomance

It's about more than getting to third base...
It's about hitting a home run 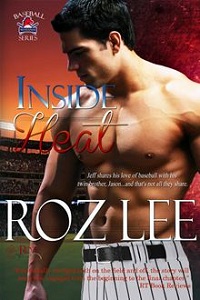 Jeff "The Terminator" Holder is the closer for the Texas Mustangs' baseball team, and revered throughout the Major League for throwing inside heat. His twin brother, Jason, the Mustang's catcher, leads the League in hits. They share a love of the game, as well as their identical DNA - but that's not all they share.

Pediatric Nurse Megan Long doesn't know baseball, but she does know a sexy guy when she sees one - or two. When she seeks out an autograph for one of her patients, she falls under the spell of two of the sexiest players in baseball. Unable to resist their charms, Megan finds herself in bed with both men, but falling in love with only one.

Locked in an epic battle against the steroid pumping Martin
McCree, Jeff's obsession with striking out McCree strains his relationship with
his brother, and leads to an injury that threatens his career and dents his
ego. Megan does her best to get through to him, but if Jeff can't see past his
failings to find the love she's offering, he's going to strike out in the
biggest game of his life.

4 Stars from Romantic Times Book Reviews
"You don't need to be a baseball fan to enjoy this searing tale of a menage that blossoms into true love. Emotionally charged both on the field and off, the story will keep you engaged from the beginning to the final chapter."

4 Stars from Night Owl Reviews
"Inside Heat is a red-hot page turner! Sizzling with hot menage love scenes and layered with emotional grit, there's not a page in the book that doesn't deliver a sinful sigh of pleasure or a pull of the heart strings."

4 Hearts from The Romance Studio
"The sex scenes were hot and in abundance which is just the way I like my romance novels, especially when the men are so domineering to begin with. Overall, Ms. Lee has done an incredible job penning this romance..."

In paperback in the US

In paperback in the UK
Bringing you the best romance books available!