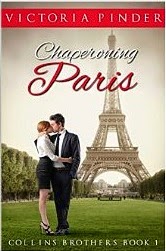 Gigi Dumont never forgot how she walked away from the only man she ever loved.

She’s a teacher who has led her students to the finals of an international French competition to be help in . The night before the trip, the principal tries to cancel the trip before he, in turn, loses his job to her high school boyfriend, Sean Collins.

Sean Collins has survived cancer, a divorce, and Gigi having aborted their child back in high school. He assumed he’d hate her, if they ever crossed paths again. But he discovers she’s exactly what he wants.

When Gigi and Sean are stuck together for a week in , Gigi feels she has lost all her control. How can she survive her attraction to Sean? The man’s sexier now than he was back in the day, and once upon a time, he’d had her heart. She finds herself falling for him, even knowing forever is impossible.

What readers are saying about Victoria Pinder:

“…quirky and funny but well written. I would definitely recommend!” ~Amazon Review for Makeup May Change Your Life