A Brutal Trade by @FaithMortimer #NewRelease #Thriller for $0.99 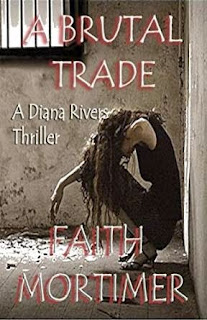 It began like any normal day in …except it wasn’t…the body of a woman brutally murdered and discovered in a shallow grave changes all that.

It is only days later when amateur sleuth, Diana Rivers and old flame, Chief Superintendent Adam Lovell discover a second female victim…only this time the discovery is even more chilling and shocks the island inhabitants.

Joining forces with local policeman, Sergeant Yiannis Loukiades, the three embark on a journey which takes them on the fringes of humanity. Disturbing secrets are unearthed. They are on the hunt for killers who will stop at nothing in their hunt for one vital woman.

As the bodies mount up, the detectives ask themselves one question. What is the reason for the women’s’ deaths and their horrific mutilations?

With the investigation quickly gathering momentum, Diana finds herself exposed to great danger…in the sights of a lethal individual who’ll put a stop to her meddling. Each move could be deadly… vicious in its outcome…can the team bring a halt to this brutal trade?