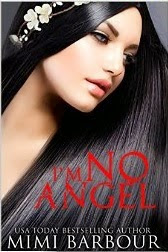 Determined to prove herself to her bossy brothers and her doting Papá, Angelina Serrano has open her own accounting firm in . But what’s a girl going to do when two months before the deadline she’s faced with an unforeseen earthquake, a sassy teenage runaway, and a theft charge? Then there’s the most dangerous complication of all—a handsome Search & Rescue hero with cat-green eyes full of pure temptation and a tendency to screw up whenever he’s near her. After saving him time and again, she’s ready to let love in, only he’s skittish and proves to be her biggest challenge.

Search & Rescue worker, Dr. Joe Davidson, has never had a victim save him before and the fact that this South American beauty comes through for him three times is a large burr in his backside. This Angel is no plaything like his other conquests, but he’ll never be caught in the marriage trap like his five hen-pecked brothers. If only he can stay away from her long enough so his disloyal body and the fierce hunger eating away his willpower will accept that she’s off-limits.