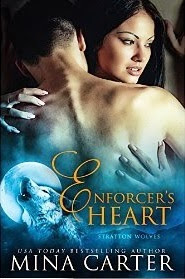 Book 3 of the Stratton Wolves Series!

Called to investigate a midnight break in, Detective Carla 'Ce' Callahan doesn't expect to come face to snout with a pissed off werewolf. And she's all outta silver bullets. But hey, she still manages to hold her own, even if she does get a bite on the ass for her trouble. Now she's in werewolf custody until the full moon while they wait for an answer to a very important question. Will she shift? Or won't she?

Doesn't really matter when she meets the hot and sexy enforcer for the pack... Looking at him, she thinks she could get used to the furry side of life. Especially when the guy has an ass like that. She wants a tiny nibble...

Riley Copeland's life sucks. The woman he loved and brought over to the lycan way of life revels in trying to get him killed and his pack alpha seems to think he's some kind of furry babysitter. He's been forced to look after a bitten newbie until she turns--or doesn't. And she's a cop, no less. Great. Just freaking great. But that ass of hers... He just wants a tiny nibble...

Of course, there's someone out there that thinks it'd be really great if she was six feet under. Now she's on the run and the chase is on. Ce may get away, but Riley is gonna catch her... and her heart.