A Song for Josh by Susan Rodgers @srbluemountain #Music #Actors 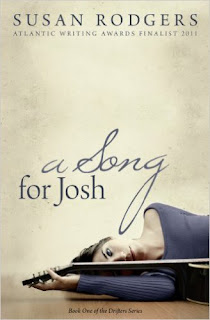 Music has the power to heal.

Discovered while busking on the streets of ’s Downtown Eastside, Jessie Wheeler, once a teen runaway from , is now a popular singer-songwriter and actor. On the day her boyfriend Charlie proposes to her, he kicks an estranged friend, actor Josh Sawyer, out of his Club. Jessie sees something of herself reflected in Josh’s sorrowful chocolate brown eyes—a deep loneliness and angst. When a part on Josh’s new television series, Drifters, becomes available, Jessie can’t resist the temptation, despite the fact that taking the part threatens her engagement to Charlie. When a past nemesis, Deuce McCall, makes a tragic appearance in the city, Jessie’s turbulent past catches up with her, threatening any chance she has at a true and sustainable love.

A Song For Josh is a simple, sweet story about hope and love, and the power of music to heal. Through Josh and Jessie’s story we learn that all of us damaged souls are indeed lovable, even when we are quite certain we are not.

“I absolutely love this book and the next 2 in the series as well. I read all 3 in 2 days!”

“Beautifully written, a strong, poignant story of making it in the world and falling in love.”

Other titles in the Drifters Series:

Promises, Book 2
No Greater Love, Book 3
Riptide, Book 4
Whispers for Home, Book 5
And Then There Was Silence, Book 6
Let the Music Cry, Book 7
If I Could Sing You Home, Book 8