The House at Homecoming Cove by @GinnyBaird #NewRelease 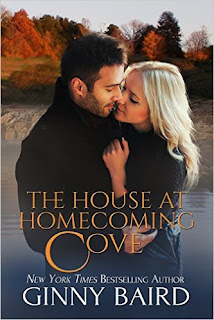 Seeking out solitude in which to work, music composer Melissa Carter rents a century-old farmhouse on the Virginia Eastern Shore. There, she meets a loner with rugged good looks and smoldering gray eyes, who has long-term ties to the property. When strange things start occurring at the historic home, the handsome groundskeeper comes to her aid, but is Melissa really safer in his arms?

When Stone Thomas meets a pretty northerner with a musical gift, he's immediately drawn to her. He's also determined to protect her from the increasingly odd happenings at the fifty-acre farm where he's employed. Soon, Stone finds himself wondering whether he and beautiful Melissa might share a future. Yet the secrets of Homecoming Cove threaten to drive them apart.

“The plot is well conceived and crisply executed and nowhere did the story lag.”

Other titles in the Romantic Ghost Stories Series:
The Ghost Next Door, Book 1
The Light at the End of the Road, Book 2