The Heart's Endeavor by Mary Wehr 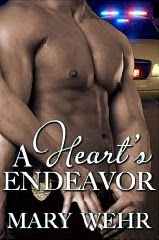 Being diagnosed with depression not only messed up Melanie Manning's life, but her marriage as well. Her husband made it very clear that he considered her "damaged goods" and he didn't have time to coddle a mentally ill wife. After his sudden death, Melanie knew she was destined to be alone. Loneliness sounded a hell of a lot better than exposing her illness to another man. Her self-esteem couldn't survive another blow.

When state trooper Jack Horan meets Melanie, the attraction is immediate. Her deep blue eyes make him weak in the knees, but those eyes also hold a hint of sadness. Jack is determined to wipe away her pain, but how can he do that when Melanie refuses to let him get close to her?

Can Melanie learn to face her fears and trust her heart in the hands of another man?

"This was a fantastic book, not just because the characters were rich and drew me in, but because Mary tackled a subject so many people shy away from."

"A quick and breezy love affair, full of life, wit and entertainment. Not to mention good old fashioned rumbling under the sheets. This is how a tale should be told."

In the US Kobo Store