This Heart for Hire by Elysa Hendricks

~The Innocent and the Gunslinger~ 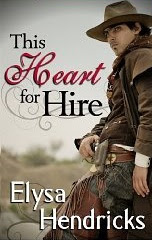 A convent reared innocent and a gunslinger with no memory struggle to survive and find love while crossing the dangerous west Texas frontier.

Abandoned by his father and betrayed by his half-brother and fiancee on the eve of his wedding, JAKE GALLAGHER no longer believes in love. Though he longs to go home, his undercover work for the Texas Rangers keeps him in a lawless Texas border town. Even though it jeopardizes his mission he refuses to stand by and watch outlaws rape and murder a young woman. Getting shot and losing his memory wasn’t part of his plan.

While fleeing from her stepfather’s plans to steal their ranch, CHRISTINA GOODWIN witnesses her brother’s murder and is left in the hands of a merciless band of outlaws. Raised in a strict convent, Christina has little knowledge of men or the world, its dangers and temptations. Frightened and alone, she is forced to accept the help of the dark gunslinger who rescues her. Though drawn to Jake’s potent masculinity, she hesitates to trust him, fearing her stepfather has sent him to bring her back. Unsure of Jake’s motives for helping her, she struggles against him, determined to find a way to avenge her brother’s death and regain control of her ranch from her stepfather.

"Elysa Hendricks keeps the pace of this story moving quickly and provides great detail. She weaves a rich plot that draws the reader in and keeps them turning pages to find out what happens next. Characters are well drawn, believable and lovable. I highly recommend this romance, especially for readers who want to fall in love all over again, right along with Christina and Jake."


"I was just as the first time blow away! The book had it all stunning characters in a beautiful rich land described by the author so perfectly that it felt as if I was actually living it!"

For Nook, Sony, and more on Smashwords