The Valentine's Arrangement by Kelsie Leverich 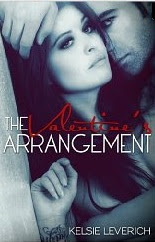 Ronnie Clark, an edgy tattoo artist with hopes of high tailing it out of the forsaken Military town she followed her now ex-fiancé to, is counting down the days until Valentine’s Day is over. Ronnie doesn’t do romance. She doesn’t do flowers or dates, and she sure as hell doesn’t do love—not anymore. After her fiancé slept with a female soldier while deployed, she has vowed never to fall in love again, especially with a soldier.

Sergeant First Class Kale Emerson is home on his mid-tour leave from Iraq, but he only has one thing on his mind—returning to his deployment to finishing leading his soldiers on their mission. The last thing he wants is a relationship, but casual sex, that’s a different story. And when he meets the renowned tattoo artist Ronnie Clark, a snarky, blunt, takes no prisoners kind of woman, that seems to be all he can think about.

But when Kale realizes he has met his match with a bombshell woman who is hell bent against love, will just sex be enough? And if it’s not, will he be able to convince Ronnie that the proverbial hearts and flowers aren’t so bad after all, even if he is a soldier?

"You changed something inside me, something I didn’t ever think I would want, or feel—but you did, and now I can’t go back"

"A well written story, no loose ends, and a great first book by Kelsie Leverich."