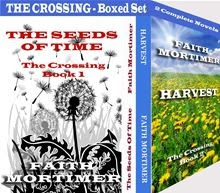 Two Complete Novels tell the story of "The Crossing"

This intensely romantic yet realistic action and adventure novel spans two generations and the unimaginable gulf between the Second World War and the present.

When Englishman Richard Barker suffers a devastating loss he learns to come to terms with his grief. He is helped by two beautiful women, newly discovered quiet and smouldering American, Sorrel and the tempestuous and wilful, Miranda an old flame from long ago.

While Richard is battling with his feelings, by chance he enters into the dark, often surreal world of his dead father's past life spent during the Second World War. It is Sorrel's Grandfather, an American Air Force pilot, who contacts Richard with some intriguing news which helps Richard to his senses.

Richard lives in a world that is sometimes as tragic as A Farewell to Arms and as sensuous as The English Patient. His story and that of his father are crafted from the ruins of war and the indestructibility of love. The action is non-stop, the locations are intriguing and the characters are appealing. There is tension, romance and harrowing escapes all woven within a story that captures the imagination and keeps the reader guessing until the very end.

Billy returns home and marries his love, while Richard has to make a decision between the two beautiful women in his life. Richard discovers he is torn between love and duty.

In Sorrel he finds what he believes is his soul-mate, whereas sexy Miranda keeps Richard guessing. When Richard discovers an old war-torn photograph of a woman and two children he is shaken to the core. What was it his father did & never divulged to his wife and family? Harvest is a world where tragedy rests alongside joy. Harvest deals with harsh, cruel, & often despicable conditions - at the same time describing the indestructibility of love in past & present lives. This is a story of deep romance, bravery, survival, heartbreak and happiness, all poignantly & convincingly conveyed. Richard's compelling desire to finally lay his father's dark secrets to rest brings warmth and understanding into the two intertwined stories. All perfectly blended with non-stop action, intriguing locations, and appealing characters.

"I thoroughly enjoyed reading this book and I found it incredibly moving at times and thought provoking, especially the POW camps sections. I felt the storyline was very good and Faith Mortimers's descriptive and very readable style of writing added much interest to the story."

"What I think is particularly notable - and what is true of all of Faith's writing - is the great talent she has for description as well as story telling. In 'The Seeds of Time', this is revealed in the wonderful, vivid descriptions of the peril and beauty of being at sea with all the dangers this involves."

Bringing you the most entertaining reads available!