The Partisan's Wife by Kathy Fischer-Brown

From The Serpent's Tooth Series 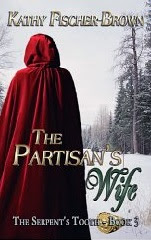 Faced with an impossible choice, Anne Marlowe is torn between her love for her husband and the hope of her father’s forgiveness. As the American forces follow up on their tide-turning victories over the British at Freeman’s Farm and Bemis Heights, Peter is drawn inextricably deeper into the shady network of espionage that could cost them both their lives.

Is his commitment to the Rebel cause stronger than his hard-won love for Anne? Will her sacrifice tear them apart again...this time forever? Or will they find the peace and happiness they both seek in a new beginning?

The Partisan’s Wife follows Anne and Peter through the war torn landscape of Revolutionary War America, from the Battle of Saratoga to New York, Philadelphia and beyond.
"The characters, drawn from all classes--loyalists, rebels, opportunists, the cruel, the mad and the kind--are crisply drawn and always believable. I'd recommend "The Partisan's Wife"… You won't be disappointed."