Flashpoint by M.C. Cerny, Book 1 of the Reed Series @mccerny 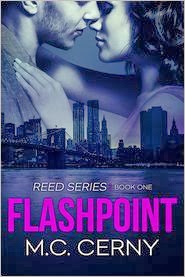 Reed Software and Securities Company: A publicly traded tech company with a hidden agenda. They are hired to take on some of the most difficult covert operations and contracts the government won’t acknowledge.

As the new CEO and face of Reed Software and Securities Company, Jacob Reed has been trying to get out of the family business as a covert operator. Lately he’s been fantasizing about settling down, living a normal life away from the paparazzi, guns, and drug lords.

Katie Wilson loves her job as a broadcast journalist for Channel 10 news. She is just beginning to explore her career when she gets the lead on a new story that could blow up an international sex trafficking operation.

When their jobs force their paths to explosively collide, Katie is caught in the crossfire and has no memory of that night. A year will pass before fate seemingly draws them together and he saves her a second time. Now that Jacob has unknowingly brought Katie into his world, she’s become a target for danger from an unknown source… and this time he refuses to let her go at all costs.

"This book had me on the edge of my seat…"


"… the characters are well written and the flashes of insight to each character leaves me wondering just enough how their story will affect where the series will go."