All About the Duke by @EvaDevonAuthor #Kindle #NewRelease 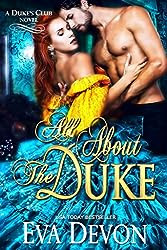 A Lady Who Vows Never to Wed:

Lady Allegra Portmund knows the cost of marriage. After the death of her dearest and only sister, Allegra swears she will never suffer the same fate. She will not become a possession shaped and destroyed by a husband. So, when her parents insist she marry the man of their choosing, there is only one thing for Allegra to do. Run. But when she runs, determined to be free, she meets the Duke of Roth, a singular man who sees her unique and vital spirit. Now that her heart is awakened to the most dangerous longings for love, how will she resist the temptation to break her vow?

A Duke Ruled By Honor:

Nicholas Andrew Edward Forth, Duke of Roth, values family above everything else. Despite his wild reputation, having lost both of his parents when he was a child, his most secret wish is to have a family again. When he meets a young lady in disguise, Nicholas quickly realizes that she is unlike any woman he’s ever met and is also the only woman for him. But when he discovers how quickly she has abandoned her own family, he doubts whether she is the exceptional woman he believed her to be. Now, that he knows the truth about Allegra’s past, will his own sense of honor destroy his only chance at happiness?

“A laughter-filled romp! All lovers of romances should venture down the road and learn… ALL ABOUT THE DUKE.”

Email ThisBlogThis!Share to TwitterShare to FacebookShare to Pinterest
Labels: A Duke's Club Series, All About the Duke, Eva Devon, Historical Romance