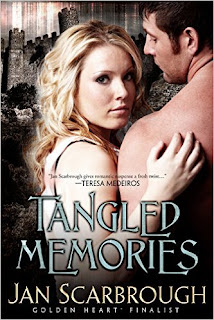 After losing his wife, Dr. Alexander Dominican is determined his infant daughter will not grow up motherless as he did. Offering sensible, kind kindergarten teacher Mary Adams a marriage of convenience seems like the perfect solution. The widow’s husband left her with a mountain of debt. For Alex, paying it off is a small price to pay for his daughter’s happiness. Until his sensible new wife begins to lose her mind.

On the day of their marriage, Mary starts having frightening hallucinations of medieval —visions that feel more like the memories of woman who lived centuries before. More terrifying, someone—or some thing—is stalking the new mistress of Marchbrook Manor. Could it be one of the sinister servants? Or Alex himself? Alex is reawakening hidden desires and longings in Mary, but until she can untangle the web of nightmares and secrets, she can trust no one. Not even Alex.

Alex has no idea he’s unleashing a destiny that’s taken him seven hundred years to fulfill.

If Alex and Mary are to salvage their future, they must first unravel centuries of…Tangled Memories.

“This story grabs hold of you and does not let go until the VERY surprising end! Jan Scarbrough's characters are wonderful, and the reincarnation facet is intriguing.” ~S Mitchell, an Amazon customer

“I am thrilled to see a revival of the Gothic romance. Not only does it have effective Gothic elements but also flashbacks to the earlier time made it seem as if I were reading two different stories that paralleled each other.” Kathy Boswell, Romantic Times Reviews