Lady and the Wolf by Elizabeth Rose @ElizRoseNovels #Kindle #NewRelease 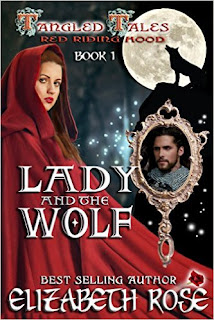 Lord Hugh de Bar, known as Wolf, has been cursed and shapeshifts into a wolf at night. He vows to kill the man responsible for his torture, Earl Roland Chaserton of Tavistock, but the man has avoided this confrontation by staying locked away in his castle in hiding. But when the man's granddaughter appears in the woods alone at night, Wolf realizes he can take her captive to lure the earl out of hiding so he can kill him. However, he needs to proceed with caution since the girl is armed with a crossbow and skilled at killing wolves—and also very alluring.

Lady Winifred (Red) Chaserton has defied her grandfather's orders and sneaked out of the castle to investigate a mysterious hidden door in a knoll that she's seen on one of the hunting trips with her grandfather's knights. Alone in the dark and without an escort, she has only her crossbow to protect her. But when she feels she's being followed by a wolf, the handsome lord of Babeny appears to protect her instead. She is intrigued by the presence of Lord Hugh de Bar, and lets down her guard. However, things aren't always as they seem, and when she's taken captive by him she realizes there is more to this dark lord than meets the surface. He says he despises her for killing wolves and being the granddaughter of his archenemy, yet his eyes tell her a different story. His gaze devours her—and she feels like he wants to eat her.

Will magical forces come between a lady and a wolf, or bring them together instead? And will the de Bar family finally find redemption from the dark magic that has been bestowed upon each of the siblings and brought turmoil into their lives?

Elizabeth Rose is the bestselling author of over 45 books. She writes medieval, historical, contemporary, paranormal and western romance. She is currently on Amazon's top 100 list of most popular authors of Historical romance. Her book, The Oracle of Delphi, has been featured on the History channel, and Thief of Olympus was a past Romantic Times nominee for Reviewer's Choice Award. Kyros' Secret has also been a finalist in the Sapphire Awards.

Find Lady and the Wolf: