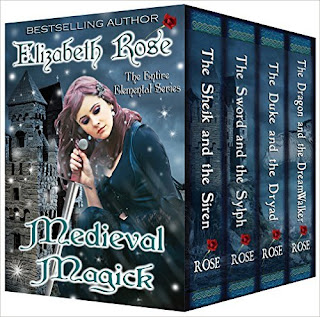 The Dragon and the DreamWalker - Book 1: Fire

Lord Drake of Dunsbard is a Pendragon and known as the infamous Dragon's Son. He saves Brynn from being sacrificed to the dragon only to discover she is feared by the villagers and known as a witch, or lady of fire. Just what he needs to help him with his quest.

Brynn-Riletta is an elemental of fire. She can control the flames but water can destroy her. She also has the ability to dreamwalk - leave her body at will. And when a brave knight saves her life, she is elated until she discovers he is also the man who has stormed and sieged her castle.

The Duke and the Dryad - Book 2: Earth

Duke Odwolfe of Manterra is known as Wolfe by his friends and Duke the Destroyer by his enemies. When his prized bull goes missing, he finds it has been sacrificed by druids in a pagan ritual and takes the woman responsible back to his castle in exchange.

Rae-Nyst is an elemental of the earth, better known as a dryad. She can control the plants and even the animals, but fire can destroy her. Can a knight who believes in nothing but war and destruction accept the exotic fae girl who honors all life instead of death?

The Sword and the Sylph - Book 3: Air

Sir Braden is headed to Banesmoor to hire out his sword and ends up betrothed to the lord's daughter. But before he marries her, he is expected to find and bring back the spy that has been infiltrating the castle's plans and secrets. He realizes the spy is none other than a woman - with very special powers.

Portia-Maer is an elemental of the air, or a sylph. She can brew up a fierce storm with a flick of her wrist, but being trapped under the ground with little air can destroy her. She also has the power to turn invisible, and heal wounded soldiers with just a kiss. When she meets a knight that she's recently healed, she realizes that now he's joined up with the enemy and she is expected to bring secrets back to the Countess that will destroy him.

The Sheik and the Siren - Book 4: Water

Lord Asad, or Ace, is captain of the Paradigm, an overseas tradeship. He's a risk-taker and determined to be the first man to hear the siren's song and live to tell about it. So he straps himself to the mast of his ship and bravely sails through Death's Door.

Ebba-Tyne is an elemental of water and a siren. She can command the seas and talk to dolphins but hot, dry desert air can kill her. When a fool sailor tries to sail through Death's Door, she sings her siren's song, and her little band of misfit men - turned pirate, board his ship. The sailor knight intrigues her like no other, but she also realizes he looks very similar to the sheik that attacked her castle, killed many of her people, and stole almost everything, not that long ago.

Email ThisBlogThis!Share to TwitterShare to FacebookShare to Pinterest
Labels: Elizabeth Rose, Medieval Magick, Paranormal Romance, The Dragon and the DreamWalker, The Duke and the Dryad, The Elemental Series, The Sheik and the Siren, The Sword and the Sylph