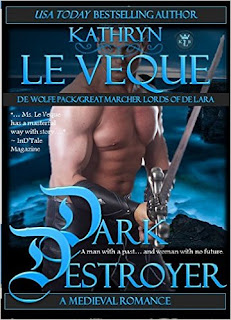 1380 A.D. - The great-grandson of the legendary William de Wolfe is not as his family had hoped; although a man of legendary skill and strength, like his great-grandfather, Gates de Wolfe is something of a legendary rake as well. A man with an eye for women, he has left a string of broken hearts all across and rumors of at least two bastards, possibly more. But Gates is also a man of humor, charm, and great charisma, making it difficult for women to resist him and making it even more difficult for men to despise him because he is such a likable character. Moreover, in battle, he is a destroyer - a knight without equal. He is a man to be feared.

Lady Kathalin de Lara is part of the mighty House of de Lara, great marcher lords. A young lady who has been educated in a convent, she is rather naive in the ways of men. When Gates meets Kathalin, he treats her with surprising respect. She is different from other women he has known and because he greatly respects the woman's uncle, a close friend, Gates makes no attempt at another conquest. He treats her with great regard. But in that regard, and in declaring she is out of bounds for his usual conquering ways, a seed of attraction for her sprouts. Gates, unexpectedly, begins to have real feelings for the lovely Lady Kathalin.

But his reputation as a rake works against him. No decent family, including the House of de Lara, will permit him to seriously court one of their daughters, and Kathalin's family denies his suit. For a spoiled, cavalier man who has always gotten what he wanted, Gates must face the reality that he must actually fight for what he wants and fight for a love he never knew he could feel.

Join Kathalin and Gates on an impossible adventure of life, love, discovery, and devotion that only angels dare to dream of.