Just a Kiss by @ElizRoseNovels ~ 99¢ #Kindle 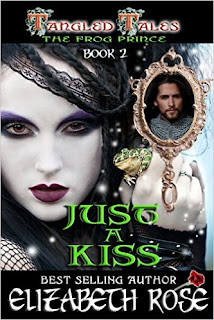 Book 2 – This adult paranormal romance is a twisted, tangled, romantic retelling of the fairy tale, The Frog Prince.

Sir Arnon de Bar has just been released of a curse from the old witch Hecuba, only some side effects still linger. He meets a mysterious woman at the swamp one night, but sees her kiss a frog and vanish into thin air. He has his sights set on claiming Castle Fane in Slapton as his own, but stumbles upon an easier way to get what he wants instead of storming the castle. The baron of Slapton is holding a competition, and the winner will be awarded his daughter's hand in marriage.

Freya Fane is a witch and more eccentric than most ladies. Especially since her Familiar is a frog. A handsome man she's seen at the swamp now appears at her castle, meaning to compete with her father and possibly claim her hand in marriage. While Freya has her secrets, one of them being that she is a witch, this man proves to have deeper, darker secrets than she could ever imagine. And when he starts acting oddly, and frogs follow him through the courtyard, she knows there is magic involved and he could be in trouble.

When magic is a curse, can it also be a blessing? And can a witch and a man who has had his share of trouble be able to stop the inevitable from happening before it is too late?

Other Tangled Tales by Elizabeth Rose: