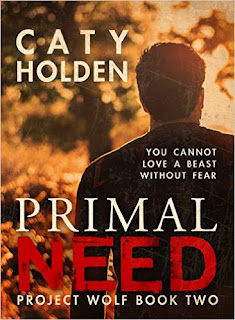 WARNING: No happy-ever-after ending (yet!) and a cliffhanger ending! Primal Need is book two in a three book series. Read Primal Rush first.

But no one told Chris, a sexy Australian commando on the run from Project Wolf, a secret military shifter program gone bad.

Chris' wolf spirit has a connection with Abby - but how is that possible when she's a civilian?

He'll do anything to protect Abby - but he's the one who needs help when Project Wolf tracks them down and sends Bravo Team, headed by the evil shifter, Khan, after them.

Now this pack of shifter super soldiers only have twenty four hours to outwit, out maneuver and out fight Khan and save Holly Falls.

But Abby doesn't have just Khan to worry about - someone from her past is not finished with her yet.

Other books in the Project Wolf Series:
Book 1, Primal Rush