A Cantata of Love by @JackiDelecki #Kindle #Nook and More! 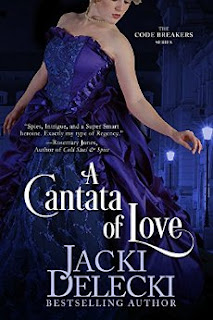 Napoleonic is no place for an Englishman, especially Michael Harcourt, the Earl of Kendal, who is on a clandestine assignment for the Crown. Already injured and facing imminent discovery by Napoleon and Fouche’s men, Michael finds his escape made even more perilous when he is charged with the safety of a young boy who must be spirited out of .

Desperate to escape the terrible fate that awaits her if she remains in France, Lady Gabrielle De Valmont must disguise herself as a boy and rely on the cunning of a virtual stranger—an Englishman, no less—to smuggle her out of the country. When the Earl’s injury becomes severely infected, rendering him gravely ill, Gabrielle realizes it is now up to her to save them both.

“Strong women, hunky aristocrats, intriguing codes, it's got everything…”

Other titles in The Code Breakers Series:
A Code of Love, Book 1
The Christmas Code, Book 2
A Code of the Heart, Book 3