You Don't Want To Mess With These Gals! 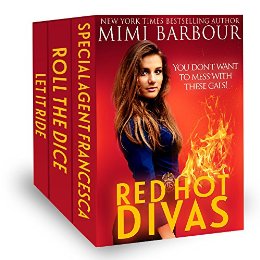 Roll the Dice, Vegas Series, Book 2: This powerful, romantic suspense about two detectives with differing agendas - yet after the same rapist – will grab you and the continuing conflicts will keep you entranced. Kai, the bald-headed, blue-eyed, purse-carrying cowboy tries to wrestle control from his new partner, gorgeous yet grumpy Aurora, but till the shocking end she fights him… and then things really deteriorate.

Let it Ride, Vegas Series, Book 6: Lisa Jordan’s life changes drastically after she begins work as a detective in Vegas. Her new female partner is a pit-bull. Her sister passes on and she becomes guardian for her adorable, three-year-old nephew. And she sleeps with a millionaire casino owner who’s kidnapped shortly after. Their steamy one-night-stand forces her to take the case… like she has any choice.