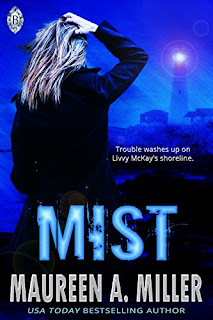 A mysterious footlocker washes up on Livvy McKay's shore. Minutes after recovering it she is assaulted by an intruder. Wounded and unable to give chase, she is startled by a knock at the front door. A stranger is looking to rent a boat from her business, McKAY'S CHARTERS. Livvy doesn't believe in coincidences. Especially when the stranger is wearing black−just like her assailant.

Jack Morell is a desperate man. After receiving a cryptic phone call from his uncle−a call spiked with the sound of gunfire in the background, he is frantic to locate his uncle's ship. Warned to use discretion, Jack opts to rent a boat from McKAY'S CHARTERS for his search.

A defiant Livvy grills Jack, but deems that he is not her assailant. In fact, she learns that the trunk belongs to his uncle. Together, they uncover its contents, and now they are being hunted.

Someone doesn't want the world to know what is in that trunk. Someone who is well-connected.

Unable to trust the authorities, Jack and Livvy have only each other. Will it be enough to survive the 's frigid clutch?

“The twists and turns of the plot made me keep turning the pages until I was done.”

“Another sure win! Combining adventure, mystery and romance into the binding of a book is what [author Maureen Miller] does best.”

The books in this series are stand-alone and do not have to be read in order.

Bringing you the best romance books available!
Posted by Donna Fasano at 10:50 AM