A Family Affair: The Gift by @MaryCampisi #NewRelease

New Release! Book 10 of the Truth in Lies Series 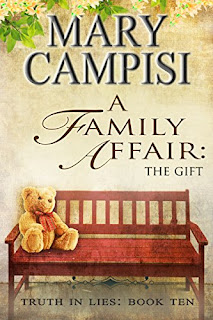 Heartache. Betrayal. Forgiveness. Redemption... It's time to head back to Magdalena, New York, and spend a little time with the people we love to love and even a few we love to hate.

Only one thing is missing from Tess and Daniel “Cash” Casherdon’s perfect life—a child. Oh, how they long for one to make their life complete. But what is it people say about being careful what you wish for…? Their wish will come true, but not in the way they think.

Daniel Casherdon’s past is about to catch up with him. It’s bad enough when a woman arrives in with a nine-year-old boy she claims is his, but confessing to a terminal illness and asking Tess and Cash to raise the boy when she’s gone? Well, that’s going to require a big leap of faith that won’t be easy or without repercussions. How can anyone refuse a dying mother such a heartbreaking request? Tess is torn between doing right by the child and acknowledging that another woman has given the man she loves something she may never be able to—a child. As the woman pulls Cash closer into her emotional circle, it is Tess who becomes the outsider, and soon she wonders if the woman has secrets she’s not telling.

More than one resident is suspicious of anyone who drives a wedge between one of ’s favorite couples. The newcomer may look and act like the girl next door, but something isn’t right, and Pop Benito is going to gather ammunition and find out what that something is. But he’d better do it fast, before it’s too late.

And Cash isn’t the only one who’s gotten a visitor from his past. Pop Benito encounters his nemesis and is forced to face some hard truths about himself and the choices he made years ago. It’s going to be one very interesting summer in ! You’re not going to want to miss it!!

Email ThisBlogThis!Share to TwitterShare to FacebookShare to Pinterest
Labels: A Family Affair: The Gift, Mary Campisi, Truth in Lies Series