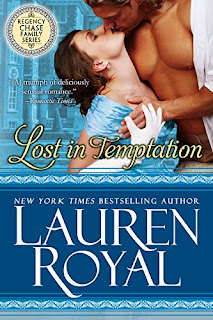 , 1815: The eldest of three sisters, Lady Alexandra Chase has always done what was expected of her. But when the man she's loved since her girlhood returns from a long spell abroad, she quite suddenly finds herself hoping the fine lord her brother has picked for her won't propose. She decides that if he does, she'll quite improperly turn him down—that is, until the man of her hopes and dreams informs her he has no intention of marrying her.

The last time Tristan Nesbitt saw Alexandra, he was a common man with no hope of ever wedding the daughter of a marquess. Seven years later, he's now Lord Hawkridge, which should make him eminently suitable for the woman who long ago captured his heart. But a dreadful scandal has tarnished his name in --a scandal so horrid that marrying Alexandra would ruin not only her flawless reputation but her whole family. For Alexandra's own good, he must fight his relentless desires and stay far away...

Other titles in the Regency Chase Series:
TEMPTING JULIANA, Book 2
THE ART OF TEMPTATION, Book 3