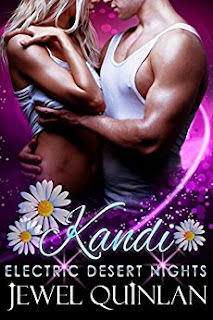 Mya goes to Electric Daisy Carnival with her friends hoping not only to have the time of her life but also to escape her problems. A gnawing hunger has plagued her for months. But even though she eats, she’s growing dangerously thin, and the doctors can’t figure out what’s wrong with her. While at the carnival, she runs into Somer who tells her he’s an incubus and that she’s paranormal as well. Mya doesn’t believe him, of course. But then when he kisses her, she feels an enticing heat curl deep within her and something else that makes her change her mind. Could Somer hold the key to making her well?

What readers are saying about the author:

“Jewel Quinlan does not disappoint.”

“…the author kept it fresh, with a good flow, and she also did a great job with her characters.”

Other titles in the Electric Desert Nights Series: