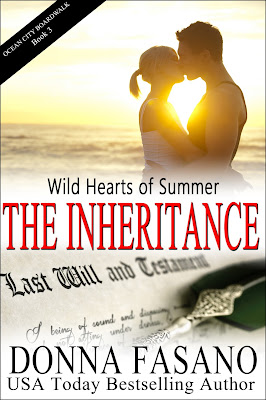 Cathy Whitley’s two best friends, Sara and Heather, may have found the men of their dreams… and that’s all well and good for them. But that’s not going to happen to Cathy. She allowed love to catch her off-guard once and it drained her, body and soul. She’ll never let it happen again. Ever.

Brad Henderson has been chasing Cathy for years. He’s settled for their on-again-off-again, “friends with bennies” relationship for far longer than he expected. Attempting to navigate the rip currents surrounding her heart has left him swimming in circles.

Then Brad inherits a business from billionaire Harold Hopewell. had traveled the world and was touched by the stories of the people he met. In death, is giving back, leaving an unusual will filled with life-altering bequests. Brad is stunned and wonders if his new life will draw Cathy closer—or push her further out of reach.

One way or the other, it’s time to draw a line in the sand…

Don't miss other books in The Inheritance Series!
Posted by Donna Fasano at 10:59 AM