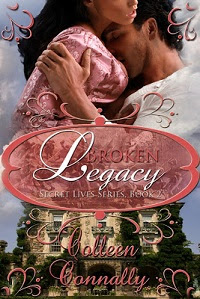 Lord Gerard Lenister needed the lady…after their meeting, he wanted her.

For seventeen years Lady Eloise Granville lived in France thinking herself a bastard. Not until her life was threatened did her father cross the English Channel to reclaim her as his legitimate daughter. Now four years later a revolution roars its ugly head in France. Rumors abound of Lady Eloise’s life before her emergence in England…rumors that link her to the notorious leaders of the French Revolution.

Lord Gerard Lenister knows well the whispered connections Lady Eloise has across the Channel and the disdain that Society holds for the lady. It matters little to him. He could have cared less if she was the incarnation of a she-devil. He would marry Jezebel herself if she helped him on his mission. He is that desperate…but soon he discovers that Lady Eloise is not what she seems.

What readers are saying about Colleen Connally:

"Colleen Connally spins a tale that scoops up the reader and transports them into action, romance and intrigue. There is so much more that makes this story spectacular. It is filled with deception, treachery, romance, intense drama, and detailed characters that pull in the reader from the beginning until the end. The secondary players add great finesse to the storyline. I have to admit it was completely hard to put this book down. Ms. Connally creates an enthralling read that surrounds with anticipation that continues to build, leaving this reader spellbound." ~Coffee Time Romance

"It's been a while since I've settled into a historical romance this good. Between the gripping mystery surrounding the scandal of Alyce Hythe's name and her passionate romance with Julian Casvelyn, Seductive Secrets had me hooked. Unpredictable catastrophe and suspicion followed Alyce throughout the novel, at every new page there seemed to be a new development to the scandal surrounding her and I absolutely loved it!" ~LaceAndLavender on Amazon