Together Again by Peggy Bird 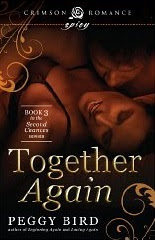 Deputy DA Margo Keyes is looking forward to this trip with as much enthusiasm as she’d have for a root canal. There’s the Philly summer heat, the high school reunion she’d rather avoid, and the speech she’d be giving as a last-minute stand-in for her boss. Mostly there’s facing high school crush Tony Alessandro. When she’d last seen the Philly cop, he’d danced her out of his sister’s wedding reception to a dark room where he’d kissed her senseless. If his nephew hadn’t interrupted they’d have . . . well, who knows?

Tony had disappeared on some family errand. She went home to Portland, Oregon the next day. She hadn’t heard from him since.

However, her homecoming turns out better than expected. The reunion and the speech work out. Even better, when she and Tony pick up where they left off in that dark room, the only heat that’s unbearable is what they generate in bed.

Margo returns to Portland wondering if she and Tony have started something she might not be ready for, relieved she’s put a whole continent between them to give her breathing room to sort it. Then his work with a federal task force investigating industrial espionage brings him to Portland. And an accidental swap of messenger bags on her flight home puts her in the middle of the investigation.

Tony wants her out of the way of the bad guys and focused on him. She wants to use a secret from her past to wrap up the case. And maybe avoid having to think about what’s happening between them. They can’t both win. Or can they?


What readers are saying about Book 3 of the Second Chances Series:

"5-Stars for a steamy story about second chances."

"Romance and crime…what a mix!"