Double the Trouble by Roseanne Dowell 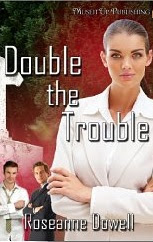 Kate Wesley left Twinsburg, Ohio five years ago after her fiancé jilted her. Now she’s back, happy and content with her single life. She doesn’t need men to fulfill her dreams, she has her florist shop. At least she didn’t until Mark Westfield showed up looking for his sister. Kate didn’t much care for the attraction she felt toward him. To make matters worse, her ex showed up, now one of Twinsburg’s finest and her heart about dropped to her feet. What was wrong with her all of a sudden attracted to two men?

Widower, Mark Westfield wasn’t interested in women. He had twin five year olds to raise and they took all his time and energy. But Kate sparked something in him he hadn’t expected to feel again.

Adam Shaffer left Kate two days before the wedding. Left a note and took off to LasVegas. Biggest mistake of his life. But now they were both back and he aimed to get Kate back. They’d both been too young before, too immature. At least he had been. Kate always had her head on straight. But he had a dream, and he needed to see it through before he settled down. Now part of that dream came true, if he could just make Kate see he had changed.

"If you like a little mystery, murder and suspense sprinkled with your love stories, then try this one. You won't be disappointed."

"…from the kidnapping of a bride on the eve of her wedding to stumbling across a body under a bush in the local cemetery, Kate Wesley has more than just two love interests distracting her. Not to mention, the victim's identical twin. Ms. Dowell kept me guessing throughout the book both whodunit and who was gonna "do it" with Kate."