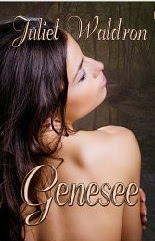 Born to a runaway teen and Iroquois Warrior, Genesee struggles to find her place, her loyalties eternally torn between two warring peoples. When the American Revolution sets the Mohawk Valley ablaze, will a young soldier’s love prove strong enough to save her?

"GENESEE is an extraordinary book about love, hardship and prejudice. It's well written and full of wonderful characters. Even though they have many differences, Genesee and Alexander are true kindred spirits. Ms. Waldron keeps you enthralled by, a little at a time, giving tantalizing tidbits of their origins. This story isn't sugarcoated, which is really refreshing. There are some instances of violence, but they're brief and handled well. Anyone who enjoys an honest, realistic story will love this one." ~Renee Burnette

"Genesee is a fascinating look into the early life of upstate New York during the [American Revolution]. Juliet Waldron makes you feel as if you’re experiencing Genesee’s trials and tribulations right along side her." ~ Lani Roberts, Affaire de Coeur

"Genesee won the EPPIE 2003 award for best historical novel. The story of confidence in one's self, faith in love and the resilience of the human spirit, Genesee is an entertaining romantic adventure set in a young America, but its lessons are timeless." ~Mary O. Bradley, The Patriot-News.