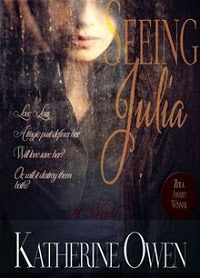 Julia Hamilton has lost everyone she's ever loved. At just sixteen, she lost her parents, at 24, her fiancé Bobby, and now at 27, her husband Evan.

She started over. Three times. She's not sure she can do it again.

Lost. Alone. In the after again. At Evan's funeral, she secretly imbibes in a leftover prescription of painkillers to battle grief while her best friend Kimberley unknowingly plies her with martinis. The almost deadly combination has her confiding in Evan's best friend Jake Winston that she's not starting over again and leads to an inexplicable connection between them.

But then, he's saving her life, literally.

Julia's mortified at her wanton behavior with Jake; yet she's unable to explain the heady attraction that still leaves her wanting him to anyone, including herself. Still, she makes an attempt to carry on--in search of a normal life--and convince Dr. Bradley Stevenson and her inner circle of friends that she's fine.

Now if Jake would just stop sending her flowers and his 'I'm sorry' notes all the way from London, she wouldn't have to think about him or think about thanking him or the illicit attraction that still ignites every time they're in the same room together.

It's the equal doses of guilt and grief that wage a battle for her mind from either side that have her on edge. And if her psychiatrist would stop insisting that she confront her past in order to effectively move on, she'd be fine.

But soon, Julia must confront all these truths--about her marriage and Evan and Jake and even herself.

Yes. All these trussed-up stories she's told Dr. Stevenson begin to unravel. Or, she does. One of these most certainly happens because sometimes you can't trust anyone, until you learn to trust yourself first.

"For some reason, I expected 'Seeing Julia' to be a fluffy, unreal romance novel...but I couldn't have been more wrong, 'Seeing Julia' is so much more. It is deep and real and full of emotion and pain and friendship and love. I can't say enough good about it."   ~Dana Burness - Let's Book It

"I found this book to be immediately captivating...The initial chapters reminded me of Maggie O'Farrell's "After You'd Gone," that's how impressed I was."   ~Becky Gulc - Chick Lit Central

"Katherine Owen is an amazing story teller. Her beautiful writing pulls you into Julia's grief, and I found my heart aching right along with her."  ~Cheles Bells - A Belle's Tales