No Gentleman Is He by Carley Bauer and Lynette Willows 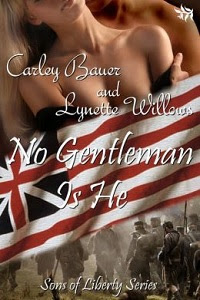 Young, adventurous and widowed in a new land, Cassandra Courtney Brooks finds her dream of raising a superior breed of saddle horse slipping away with the death of her husband. Left with four horses, living in a tavern attic, and her scant savings depleting, she resolves to see her vision through to fruition by accepting the scandalous position of steward at Varina Farms.

Born in the image of his native ancestry, Colton Rolfe’s savage blood runs through his veins. Scorned by his father, Colt grew into a man of ill temperament whose only interest is the wild equine beasts on his plantation. His desire to breed his horses with the superior Thoroughbreds of the newly widowed Cassandra Brooks leads him to abandon societal rules. Colt’s growing resentment toward the Crown and his assistance to Sons of Liberty missions is complicated by the discovery that Cassandra’s father is a titled English nobleman.

Cassandra is soon forced to question the wisdom of her decision when she finds herself enamored with her employer. As fiery passion grows between them, Cassandra realizes her own spirit of independence, love of the land, and the savage man who is so much a part of it.

As the threat of war comes ever closer, wills are tested through gunfire, treachery, danger, and kidnapping. Does Colt dare trust Casandra with Sons of Liberty secrets? More importantly, can he trust her with his heart? And will Colt ever trust Cassandra enough to love her as she longs to be loved?

"A beautiful love story and an exciting book, you really feel for these people in those times. I can't wait to read the next [book in the Sons of Liberty Series]!!"


"Once I started this book, I couldn't put it down. This is a great, historical romance. Colton is a bit of a Rhett Butler, he's dark and misunderstood by society. Cassandra, on the other hand, is no Scarlett and I mean that in a good way."

Email ThisBlogThis!Share to TwitterShare to FacebookShare to Pinterest
Labels: Carley Bauer, Historical Romance, Lynette Willows, No Gentleman Is He, Sons Of Liberty Series