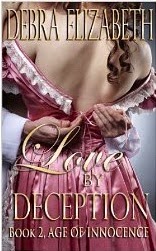 Content with her life as a lady's maid, Isabel Knott learns the father she never knew has left her a fortune. The news comes with one restriction—she can never reveal his name. Isabel falls in love with Colby Tisbury, but with her nonexistent pedigree his father, Lord Tisbury, will never accept her as his daughter-in-law.

Colby Tisbury must marry, and soon. If he doesn't find a bride before the end of the Season, his father will choose one for him. Then Colby meets sassy Isabel Knott, and everything changes—but can he go against his father's wishes and marry a girl utterly lacking in family and connections? Isabel is forced to make an impossible choice—reveal her secret identity and bring shame to her true father or lose Colby forever.

“There is a shocker or two in store when it comes to Isabel. Twists in the story that I never saw coming. Another fun read and great follow-up to its predecessor.”

“I highly recommend you check out Love by Deception as well as Love by Secrets. You won't be dissapointed.”