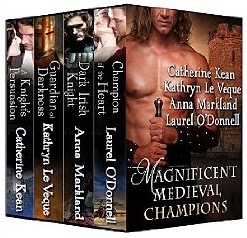 A KNIGHT'S PERSUASION by CATHERINE KEAN -- When a LORD finds an unconscious, wounded woman, he recognizes her as the LADY to whom he was almost betrothed. He rushes her to safety, but is captured by his father's enemies. Imprisoned along with the lady, who has amnesia, he tries to find a way to escape and save them both. As their forbidden love grows, will her memories finally return, or will the villains destroy all?

GUARDIAN OF DARKNESS by KATHRYN LE VEQUE -- LADY Carington Kerr is as gorgeous as she is fiery, with emerald eyes and a luscious figure. She is sent to Prudhoe as a hostage to ensure her father's good behavior. Sir Creed de Reyne is a gentle GIANT of a man, by nature calm and wise. He is the ice to Carington's fire. Creed is placed in charge of the beautiful captive as both her jailer and her protector. As dangers mount around them, Creed and Carington must fight for their very survival as two countries and a kingdom seek to separate them.

DARK IRISH KNIGHT by ANNA MARKLAND -- Ronan MacLachlainn is rumored to be the
of a selkie, intent on vengeance for the murder of his wife and the loss of his Irish lands. Torture has left him blind in one eye. Nothing can stand in the way of his vengeance, not even love. Rhoni is the pampered DAUGHTER of a powerful Norman Earl. Can she make Ronan whole again?

CHAMPION OF THE HEART by LAUREL O'DONNELL -- He is an outcast THIEF known as the Black Fox, vowing revenge against those who unjustly stripped his father of his knighthood and lands. She is the PROTECTOR of the orphaned children of her village, promising to bring the Black Fox to justice for his dark deeds. Can Fox uncover the sinister secrets from their past and become the champion of his lady's heart?