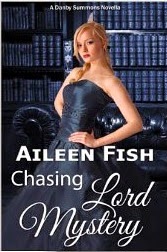 Lord Northcotte is not in the holiday spirit when he joins his sister’s family shortly after the brutal death of a friend. Discovering a matchmaking scheme is afoot, he tells them he will never marry Lady Miriam or any other woman. Now if only his heart would listen.

Lady Miriam’s mother accused her of chasing Lord Mystery after a noble act by a handsome gentleman six years ago became the measure of all other men. Now he’s staying at the home where she’d hoped to escape a summons from her grandfather, the Duke of Danby. Terrified Northcotte will recognize her and reveal the contents of the scandalous letter she wrote him years ago, she can’t decide which is the bigger threat: the duke armed with a special license, or Lord Mystery, who carries a secret she’d never live down.

“…the characters had substance. I have also been intrigued by the other men in the "no marriage" pact, and would like to see them find their fates as well.”

“…a great comedy of errors and misunderstandings. Despite its brevity, this is a charming story.”

“I enjoyed this book very much. It was well written. I am looking forward to reading more of [Aileen Fish’s] books.”