#FREE An Officer and a Gentleman Wanted by @BeverleyWatts #Kindle 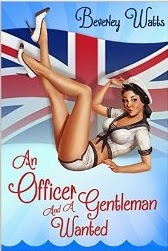 Beverley Wilkins has always dreamed of becoming an officer's wife and working at the Royal Navy's premier officer training establishment could just be the way to do it. She might be divorced and in her mid 40s, but that doesn't mean she's given up on romance - after all, she's seen An Officer and a Gentleman!

The only problem is that so far, the only man in her life is her dog Nelson who unfortunately has a mind of his own - not for nothing is he named after 's greatest hero.

But it's a new semester which means new officers...

Quirky, funny and occasionally poignant, An Officer and a Gentleman Wanted is a very British romantic comedy written as a light-hearted diary with a dash of Bridget Jones meets the Navy...

"A mixture of vulnerable femininity, delinquent dog and an irrepressible sense of fun in a setting of stuffy tradition at one of the world's most famous naval training establishments."

"The descriptions of Beverley and Nelson's misadventures had me laughing so hard I was crying."

"It's a cute, quirky, & lighthearted read that will, at the very least, leave you feeling all warm and fuzzy. At least that's how I felt when I finished reading it."

Email ThisBlogThis!Share to TwitterShare to FacebookShare to Pinterest
Labels: An Officer And A Gentleman, An Officer and a Gentleman Wanted, Beverley Watts, Books about the Navy, Bridget Jones, British Romance Authors