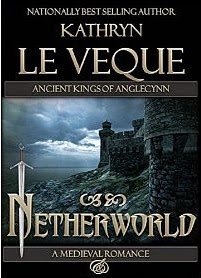 1197 A.D. - Smarting from the loss of his betrothed, Sir Keller de Poyer has learned not to trust women. A bear of a man with a brilliant mind, Keller is socially awkward but an accomplished knight. He is so accomplished in fact that his liege, William Marshal, gifts the man with lands in for his meritorious service. But there is a catch - in order to secure the lands and titles, he must marry the Welsh heiress.

And so begins the journey into the Netherworld - a castle with a dark reputation and an heiress who hides her own terrible secrets. Death lives at Nether and Keller is caught in the maelstrom. Can he save his new wife from danger and betrayal before it's too late?

Kathryn Le Veque is an award-winning, nationally best selling Historical Romance author consistently ranked in the top 100 authors of the genre. Kathryn has taken the Medieval Romance world by storm and is a dominant presence in the category with several novels always in Amazon's Top 100 rankings. If there's a Medieval Romance list, chances are that Kathryn is on it. Kathryn's Medieval Historicals have been called 'detailed', 'highly romantic', and 'character-rich'. Kathryn is the author of 50 novels and counting.